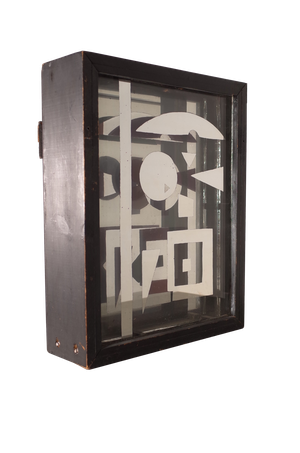 Humphrey Spender, (1910 - 2005) was a photographer, photo-journalist, artist and textile designer who made his name during the 1930's as a young man photographing the housing conditions of London's East End. He is listed with the National Portrait Gallery. His brother notably was Sir Stephen Harold Spender, himself a poet and man of letters. Humphrey made this sculpture in the early 1960s.  Entitled 'Space Mirrors', this was an unusual piece in that it was not a medium Humphrey had really worked in and as such, is a rare survivor of a lifetime of creativity, photography and textile design and public commissions including a mural for the Television Pavilion at the Festival of Britain. This very stylish sculpture had originally been displayed and sold in November 1964 at the famous Redfern Gallery in London (who also exhibited the likes of Man Ray and Francis Bacon at the time). A year before his death, he was enrolled as an honorary member of the Royal Photographic Society.

UK/Europe | All free UK wide shipping is provided by tracked overnight national courier or postal services. Large or fragile items are delivered by an insured dedicated driver in mainland UK only (Northern Ireland, Channel Islands, Scottish Isles, some remote Scottish Highlands, Isle of Man and Isle of Wight are excluded).

For all other UK destinations including shipping of any exceptional or very large items, or if you require a two person delivery service, we can normally obtain a competitive shipping quote including VAT to offer a fast and professional delivery service with national reputed couriers who will deliver your purchased item(s) direct to your door. Please get in touch for a quotation. Following the madness of BREXIT, we are currently unable to provide quotes to the EU for larger items requiring dedicated driver delivery.

Unless otherwise specified, any P&P charges provided or quoted by us are subject to VAT.

International | Please get in touch if your require delivery to other worldwide destinations.